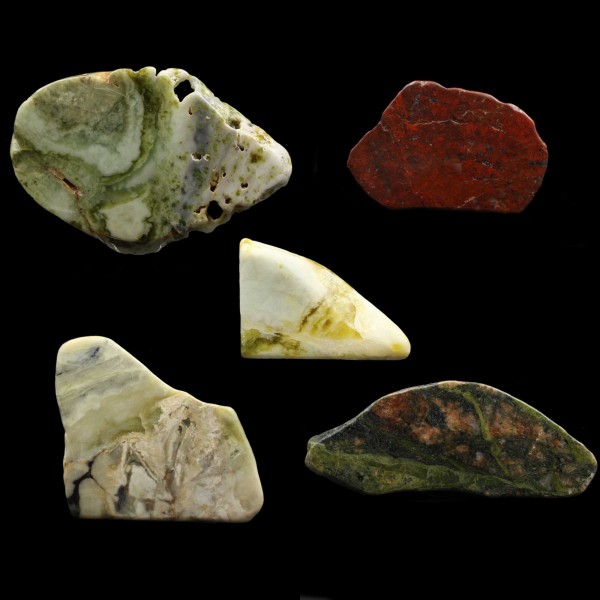 A pack of 5 different Scottish stones, one piece of Highland Marble, Skye Marble, Iona Marble, Red Jasper and Lewisian Gneiss.
You will receive the exact same stones as pictured.

Scottish Red Jasper
Each piece of jasper has been collected by hand from various locations along the east cost of Scotland.
Jasper is a microcrystalline variation of quartz that has been prized as a gemstone since ancient times.
The red colour is due to included iron but the colour of jasper can range from yellow, red, brown and sometimes even green.
Scottish Red Jasper also contains a mixture of white quartz and hematite.

Scottish Skye Marble
The Skye Marble comes from the Scottish Isle of Skye in the Inner Hebrides and is hand collected in a quarry in the shadows of the Cuillin mountains.
Only 1 kg in 1000 kg is of high enough quality to create jewellery with.
The marble was created about 500 million years ago and displays an array of different colours, including rare blue, yellow and pink.
Most of the material is composed of green and black serpentine which is mixed with white or grey limestone which was formed millions of years ago from ancient corals and shells.
It is said that the Skye marble has a calming effect which fits with the reputation of the Isle of Skye as a place to calm down and connect to yourself.